Style and direction in interior

Kitsch, kitsch (German Kitsch — hack-work, bad taste, "cheap stuff") — one of the phenomena of mass culture, a synonym of pseudo-art in which the main attention is given to extravagance of appearance, clamorousness of its elements. Special distribution I gained in various forms of the standardized household ornament. As an element of mass culture — a point of the maximum withdrawal from elementary esthetic values and at the same time — one of the most aggressive manifestations of tendencies of a primitivization and a profanation in popular art.

As the word was included into the use in reply to large volume of the artworks which have appeared in the XIX century in which esteticheskiyekachestvo were mixed with the exaggerated sentimentality or theatricality, the kitsch most close associates with art sentimental, luscious or tearful, however this word can be applied to an object of art of any grade, defective for the similar reasons. Irrespective of, whether he acts sentimental, effective, pompous or creative, a kitsch call a grimace imitating outer side of art. Often say that the kitsch relies only on repetition of conventions and templates and is deprived of the creative beginning and the authenticity shown by true art.

Though the word etymology authe 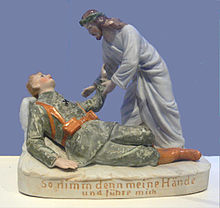 ntically isn't defined, many believe that it arose on art markets of Munich in the 60th and 70th years of the XIX century as designation of cheap, quickly being sold pictures and etudes and was born or from distorted English sketch ("sketch", "etude") or as reduction it is mute. verkitschen — "to vulgarize". The kitsch appealed to rough feelings of recently enriched Munich bourgeoisie which representatives as the majority of nouveau riches, considered that they can reach the status of envy of cultural elite serving for them a subject, imitating, let and clumsily, to the most noticeable lines of their cultural customs.

Antiques — a desk set as a kitsch example
The word began to mean over time "sostryapyvany (works of art) hastily". Kitsch began to define as esthetically impoverished object of low-standard production intended rather for identification of the recently acquired social status of the consumer, than for awakening of original esthetic sense. Kitsch considered esthetically poor and doubtful morally, forcing to endow an esthetic aspect of life, usually, though not always, for the sake of designation of the social status.

Material from Wikipedia — the free encyclopedia