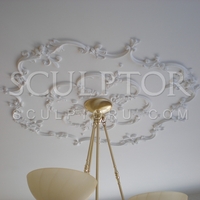 It isn't necessary to invent the bicycle!

This popular phrase became a peculiar symbol of today's time. Really, after all everything is thought already up. Why to connect idea and the imagination if it is possible to make as it became tens and hundreds times before? And as a result …

By radio identical music sounds, on TV show created as if under a carbon paper of a talk-show and series, book shelves are filled up by the same detectives, and houses are erected according to almost identical projects.

You remember as in "Twist of fate"? "Standard apartments are arranged with mass-produced furniture, and standard locks are cut in faceless doors".

Probably, for this reason the portfolio of a creative workshop "Sculptor" causes in you, our clients, such LIVE emotions and sincere delight. Sometimes for fun us call by the island on which come up to escape from the terrifying force of a storm in the consumer goods sea.

If you read now these lines, means already made the decision. The decision to change "that all have" on a true art which will change your house.

Present a difference between a suit sewed on the catalog, and creation of the designer the IDEA and VIVACITY were which main rush.

On what suit you would stop the choice?

In a creative workshop "Sculptor" of banality is opposed uniqueness, standartnost – an art exclusive, ordinariness – idea and the imagination, to templates – refined style.

Your house never and will seem to nobody empty and gray (and business here not in paints). Because in it there will be a main thing – MOOD which gives ART.

If you are ready to decorate the house with something really real and unique, it is enough to you to wish only. And artists of a creative workshop "Sculptor" are able to embody desires in tremendous sculptures of reality.